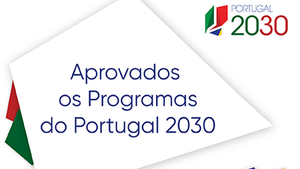 On December 15, 2020, 12 Portugal 2030 Programs were approved that will mobilize, over this decade, a total of 23 billion euros for projects aimed at the development of the country, a development based on companies and the economy, people, sustainability and territory.

This action marks the culmination of a long process that started in the second half of 2021, after the publication of the European regulations, with the negotiation of the Portugal 2030 Partnership Agreement.

For the 12 Programs to be in place, it is now important to conclude the national framework legislation.

The conclusion of this process will be essential for the organization of the entire ecosystem of the European Funds and will be followed, until the end of the 1st quarter of 2023, by the approval of the general rules for the application of the Programmes, the appointment of the respective teams management, as well as the definition of specific regulations and the preparation of selection criteria for the types of action to be supported, which will make it possible to launch the first notices for submission of applications.

Until the Portugal 2030 Programs are fully operational, in addition to the Extraordinary Anticipation Mechanism, which made it possible to support some of the measures to be financed by Portugal 2030, the country has to carry out the investments supported by the previous programming cycle, with a view to ensuring a closure success of Portugal 2020.

Added to these are the European Territorial Cooperation programs in which Portugal participates in partnership with the other Member States.