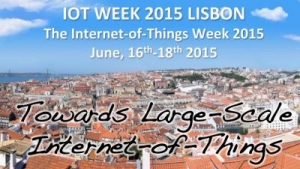 The IoT Week (www.iot-week.eu) originated in the IoT European Research Cluster (IERC) and has become the pre-eminent IoT event in Europe attracting industry and research from around the world to debate and showcase the Internet-of- Things of today and of the future. Since 2014 the IoT Week is organised by the IoT Forum, jointly with a local host chosen by the members of the IoT Forum. For 2015, Portugal has been selected as hosting country of the IoT Week! The event will take place from June 16th-18th in Lisbon.

Portugal is well positioned in respect to the Internet-of-Things. Notably, the global  Vodafone  M2M  middleware  platform  is  being  developed  in  Portugal (Lisbon) and also the Bosch M2M&IoT solutions are developed in Portugal (Aveiro). The major Portuguese telecoms like Portugal Telecom and ZON Optimus are now strongly pushing their M2M&IoT business areas. Many champion SMEs are developing solutions and making business in IoT. And also, key cities like Porto and Lisbon are building their smart-city strategies building on IoT technologies and data.

IoT Week 2015 is devoted to large scale Internet-of-Things. Now that the Internet-of-Things is a reality worldwide (notably, the IoT was the main attraction at CES 2015), we will be looking especially at how to bring IoT into large-scale adoption and widespread use. IoT Week 2015 will contribute to understanding of the future of the Internet-of-Things in large-scale deployments considering the technological and  research dimensions but  also  innovation, user  acceptance, security and privacy, business models, etc. As such, the IoT Week 2015 will pave the way for the future European Internet of Things Large Scale Pilots (LSP) envisioned for the Horizon 2020 Work Programme 2016-17.

IoT Week 2015 takes place exactly on the week after the best night to be in Lisbon in  the  whole year: the  night of  June 12th to  13th (that extends throughout the weekend)! Every year the city of Lisbon celebrates the day of its patron saint, St. Anthony, and hosts a diverse program that combines traditional and folk events, with other more recent and eclectic ones. Be sure not to miss, if you can! Please book flights and accommodations ahead as it can get scarce / expensive as time passes!

1) Industry: How is industry supporting the jump to large-scale IoT? The telecoms views, the technologists’ views, the killer applications, the SME views, etc.;

2) Research: What research is needed for supporting large-scale IoT of the future? The RTD views, the users’ concerns, the research policy views, etc.;

The programme of the IoT Week is built up by the IoT community and signed off by a secretariat assembled from leading persons in the IoT field. The IoT Week also prides itself on involving the IoT community in building up the wider programme so you can propose sessions, talks and even apply for exhibition space. We also invite you to suggest ideas for pre- and post- events for 15th and
19th, respectively.
•   Grassroots sessions: http://goo.gl/forms/0zeOVubCVV
•   Proposed talks: http://goo.gl/forms/KvtwLqjzBC

Aside from the intense main programme, the IoT Week 2015 will also include an IoT hackathon – the first ever in Portugal. IoT Hackathons are melting pots of hands-on  innovation  and   excellence  where   the   IoT   tech   wizards   create outstanding IoT solutions. The IoT Week 2015 Hackathon will have, amongst others,  a  selection  of  the  most  renowned  IoT-related  labs  from  Portuguese industry, SMEs and academia. The IoT Week 2015 Hackathon will be an open event to the general public with high visibility and foresee great attention from the media.

IoT Week 2015 will be held in the Lisboa Congress Centre located near the Tagus river. The Centre is owned by the Portuguese Industrial Association (AIP) that has been an innovation driving force in Portugal for the last 176 years! The Centre is situated close to the historic area of Belém where, 500 years ago, the Portuguese sailing ships set sails to discover new worlds. The Lisboa Congress Centre is then perfect venue to discuss and plan an ambitious future for the Internet-of-Things inspired and honouring a bold and glorious past.

The IoT Week 2015 venue offers excellent opportunities for exhibition and exposure of your organisation, initiative or project. You can bring your own stand or take advantage of the solutions made available by the organisation. The main exhibition area will be situated in a highly visible area of the Congress Centre. Delegates will pass through the exhibition area many times throughout the event days that is co-located with the sessions’ zone. Furthermore, coffee and lunch breaks will be held inside the exhibition area. This allows for plenty of interaction with the delegates.

UNINOVA  (www.uninova.pt)  and  FCT-UNL  (www.fct.unl.pt)  are  the  local hosts of IoT Week 2015. UNINOVA institute proudly celebrates this year its 30 years as a well know reference in research and technology development being involved in several research and industry IoT-related projects both at national and European level. Faculty of Sciences and Technology (FCT) is one of the nine schools of the Universidade Nova de Lisboa (NOVA). FCT-NOVA is a research faculty and one of the most prestigious Portuguese public schools of science and engineering. UNINOVA operates the FCT-NOVA CTS (Centre of Technology and Systems) research centre whose strategic project for 2015-2020 is built around the Internet-of-Things and Cyber Physical Systems.

Building on the successes of London, Helsinki, Venice and Barcelona, the IoT Week  Lisbon  will  boldly  continue  the  journey,  bringing  focus  to  the emerging opportunities of the Internet-of-Things; connecting the global business  and  research  communities  innovating  at  the  boundaries  of  IoT; promoting international collaboration and addressing societal and market issues; and much more.